Following Serco's memo regarding the MTO's notice to resume DriveTest services on June 22, 2020, we conducted a massive survey of the members.  There is a lot of data, and the survey was broken into sections for reporting.  This is the first of those reports.

This survey was much denser than the previous survey and is taking longer to unpack the data.  In this report, we will hit some of the items that relate to every member, and break it the more role-specific items in subsequent reports.

The first question we will look at is the ability to return to work on June 22, 2020.  This question used the word “capable” to differentiate between being able, and being willing.  Some answers were reclassified from the “No, for a reason not listed here” to one of the other answers based on the further clarification a person provided (for example if they chose that option, but then listed their reason as "child care").  Answers still remaining in that category include things like parental leave, etc, which are independent of COVID-19. 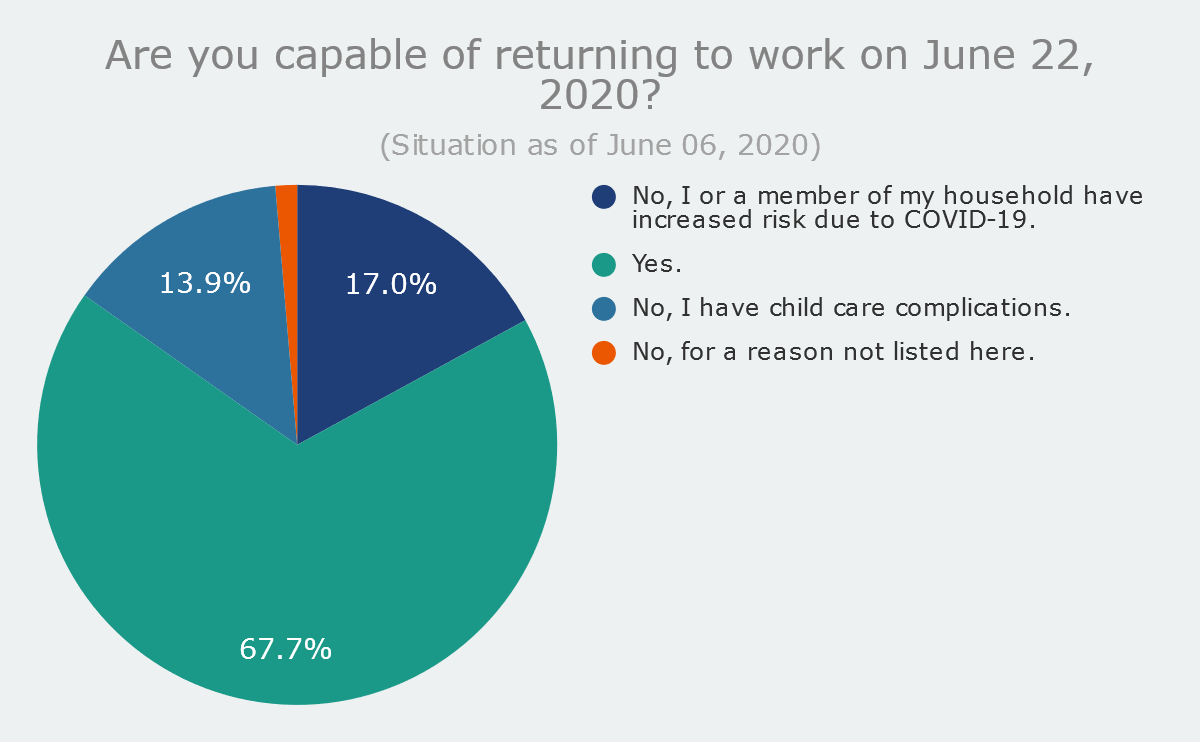 From the reclassified data, there roughly two-thirds (67.7%) of employees that could return to work.  A further 30% of members would be unable to return because of family commitments of some sort.  There were members who noted they could return if child care was no longer an issue.  It is expected there will be announcements regarding day cares, etc in the coming weeks,, which may or may not have an impact depending on the ages of members’ children.

Across every survey, regardless of current willingness to work, there was a desire to return to work in a manner that reduces the risk as much as possible.  One item listed on Serco’s list of safety measures includes taking the temperature of staff members each day before the start of their shift, and there appears to be support for this, however many members raised excellent points against this practice even if they answered “yes.” 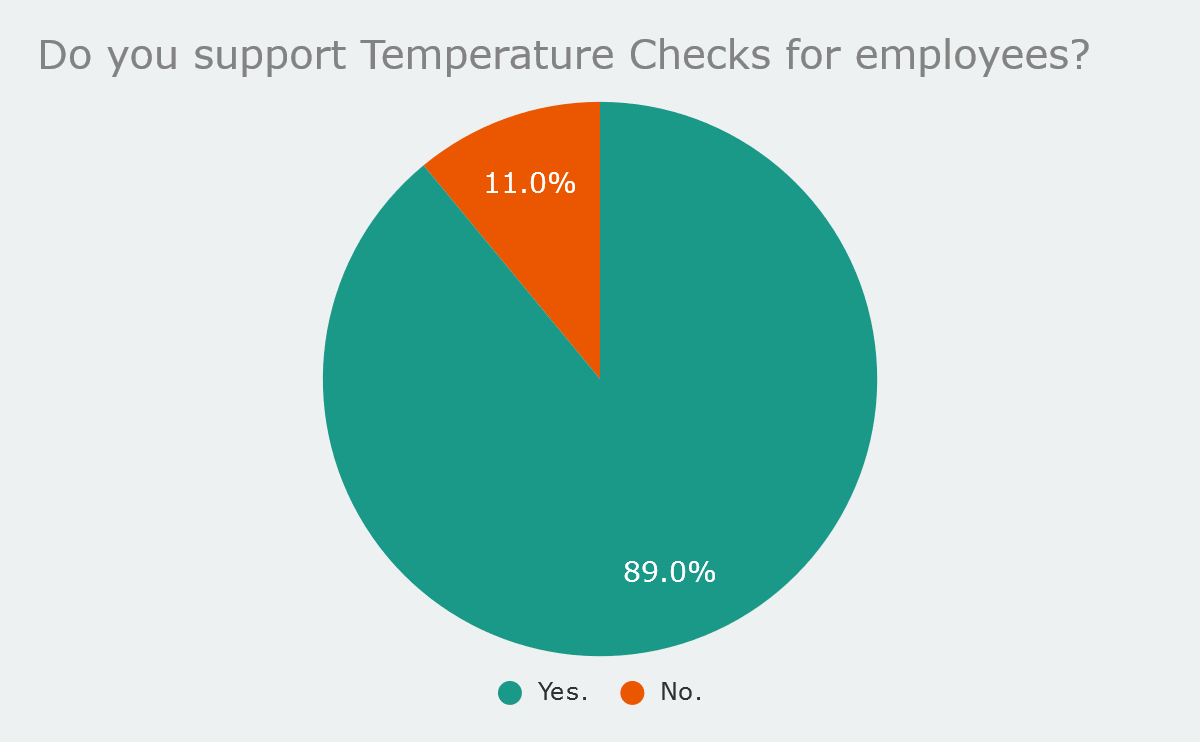 One consistent matter was the accuracy and/or effectiveness of this process.  While fever is a common sign of COVID-19 infection, it may not present at all in some individuals.  There are many reasons not related to viral infection that could cause a person to register an above normal body temperature (including overexertion, vaccines, alcohol withdrawal, inflammatory conditions, medication, endometriosis, STIs, hormone changes or disorders, cancer, etc).  As a lack of fever is not a guarantee of health, nor the presence of fever exclusively associated with COVID-19 infection, this cannot be reliably used.  It also raises privacy considerations for employees, especially if Serco is expecting them to divulge an explanation for the elevated temperature reading if the member is impacted by another factor.  Even without disclosing information, the employer will be able to make inferences about health they would not have normally had access to.

Serco has not made comment who would be conducting the checks (Serco employee, outside contractor, etc), nor what is the procedure for when a member (or supervisor) is sent away.  It’s also unclear what would happen in the instances of small offices having someone to cover breaks, and that person being sent away. 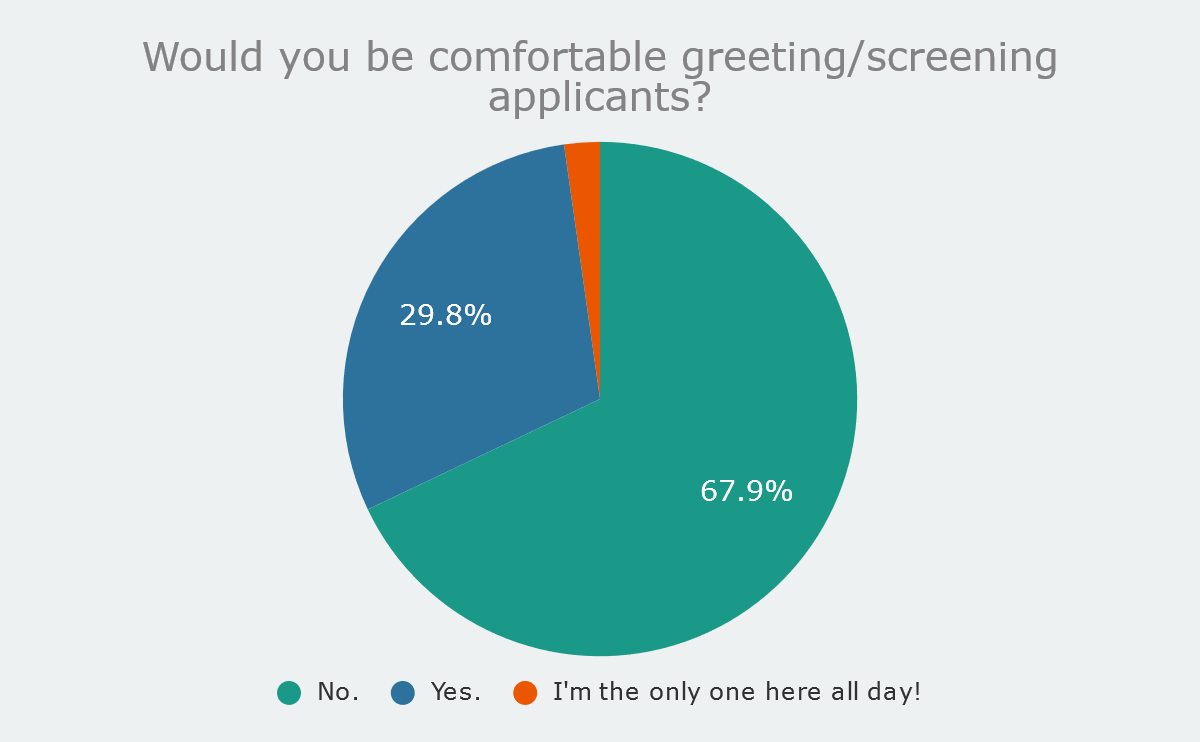 There are many comments asking for outside contractors to handle this matter instead of members.  This is also obviously important at smaller sites where there may be only one person working inside the DTC at a given part of the day.

Members are not just concerned with exposure from the public, but also within staff-only areas of the DTCs. 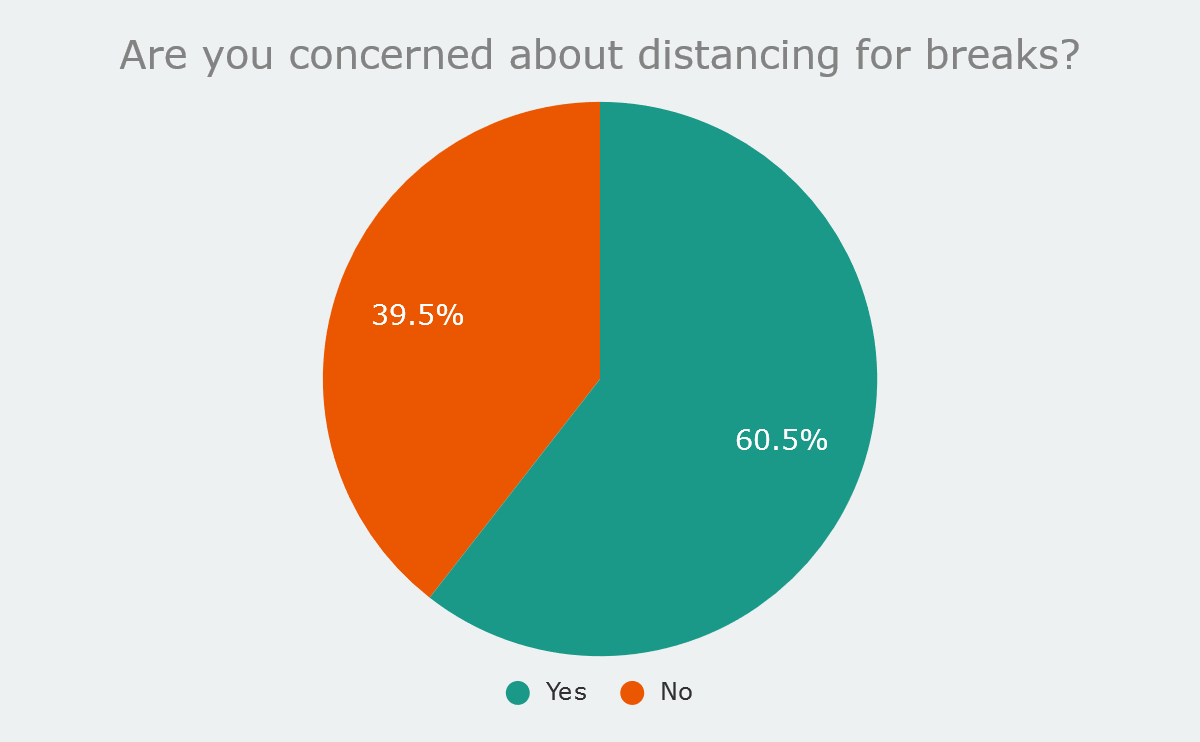 As with answers in other areas, physical distancing guidelines (2m of distance between individuals from different households) were deemed important.  When asking about breaks/lunches, it is assumed members would not be wearing Personal Protective Equipment (PPE) and have increased risk of exposure to infection.  Many members expressed cramped break areas, sharing of break areas with other functions (e.g. verbal knowledge tests), and the general cramped quarters in many offices.  Comments regularly mentioned the close proximity not just in break areas but in working areas also (CSA counters, in vehicles, etc), as well as when going in and out of the centres.

When not eating on break, it is expected members will be required to wear “masks” while at work.  The word “masks” can refer to many different types of face coverings right now.  Nearly all informal conversations with members lately have referenced “masks” so it is important to see what people mean when they are talking about “masks.” 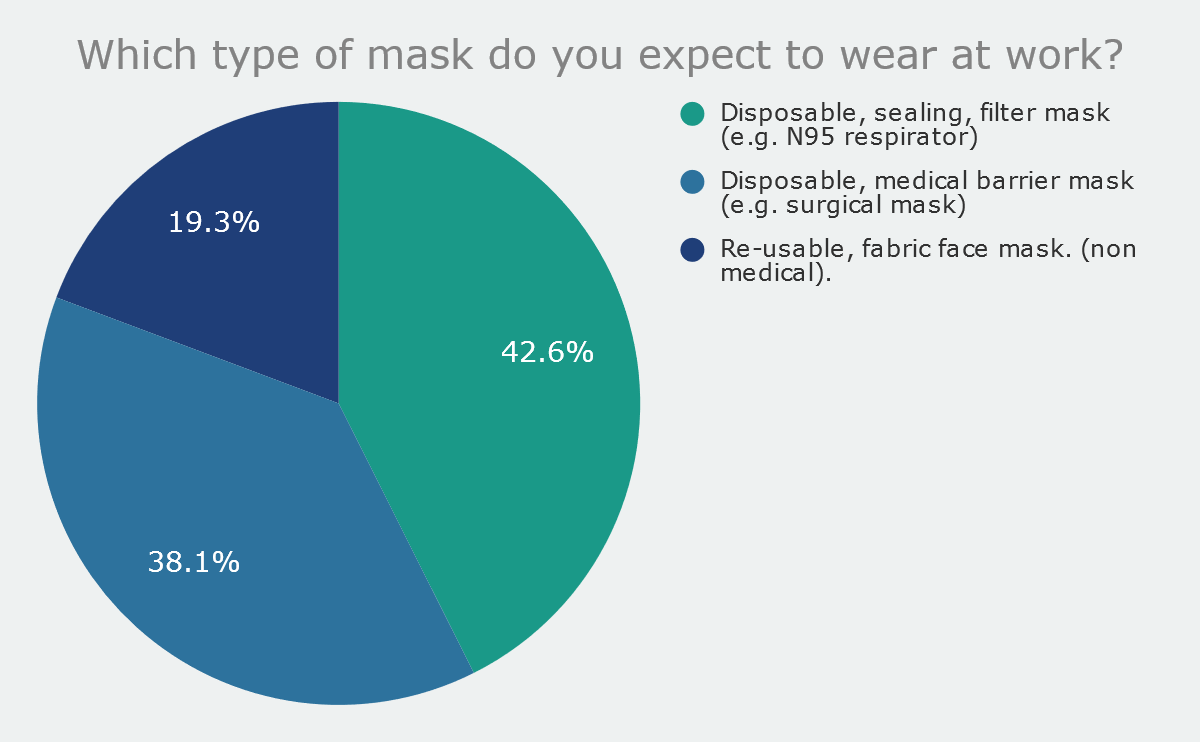 The vast majority (80%) of members feel they need a medical-grade mask of some sort.  This is different from the attitudes towards the face coverings for road test applicants. 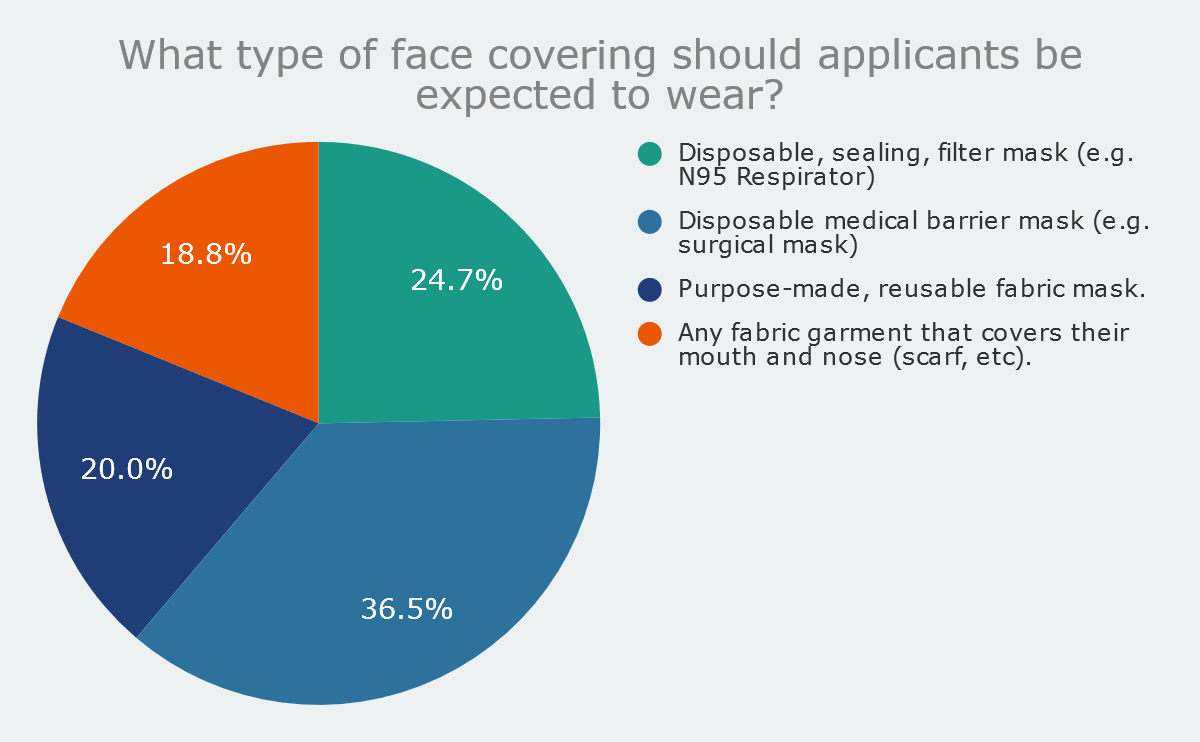 While members place a huge premium on the protection they need from droplets and aerosols as indicated in the masks we want, the idea of prevention of infected droplets and aerosols isn’t supported as strongly by the addition of allowing applicants to wear non-mask face coverings.  The idea we need a different level of protection while in the same situation as the applicants likely needs further exploration.

Aside from asking for “masks,” one of the other most common comments during this time of shutdown has been in regards to the circulation of applicants around the province.  This has anecdotally been raised in the past in regards to shady DI practices, but we have never asked for data on this previously to get a feel for how much it actually happens.  Each group (CSAs, DE2/DE3 ,and DE4s) was asked to estimate how frequently they saw applicants which had come to their center instead of attending one that was closer to their home. 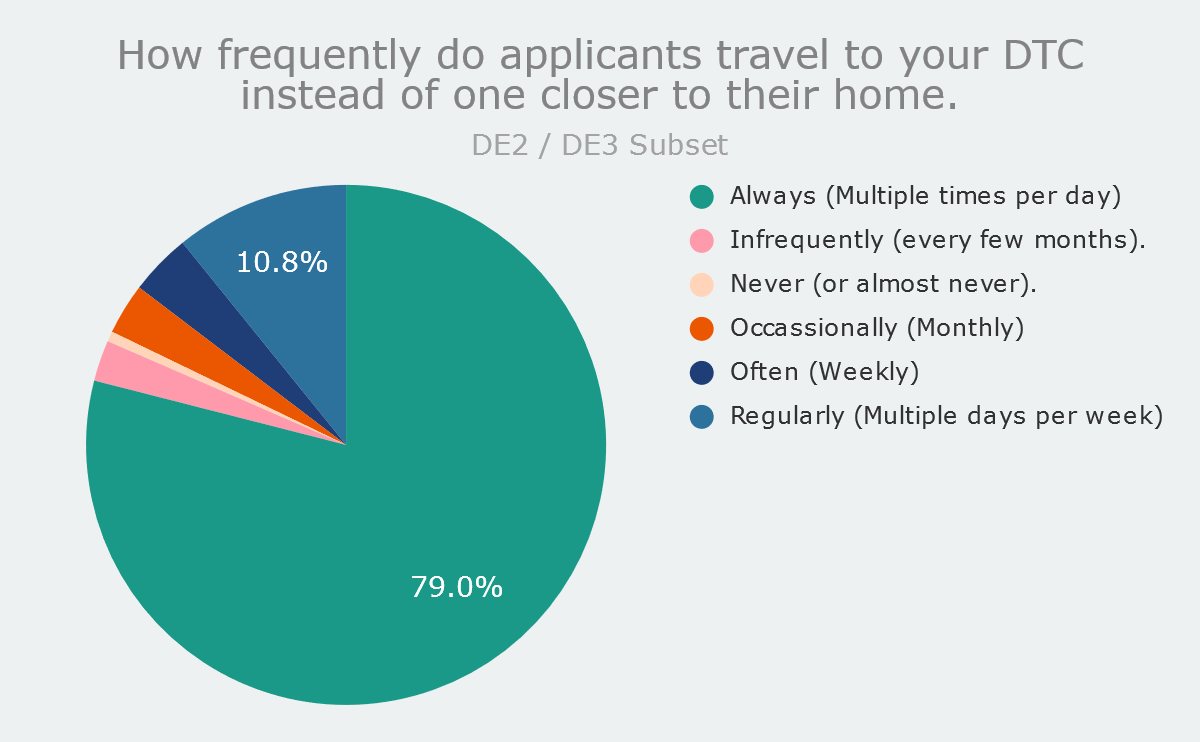 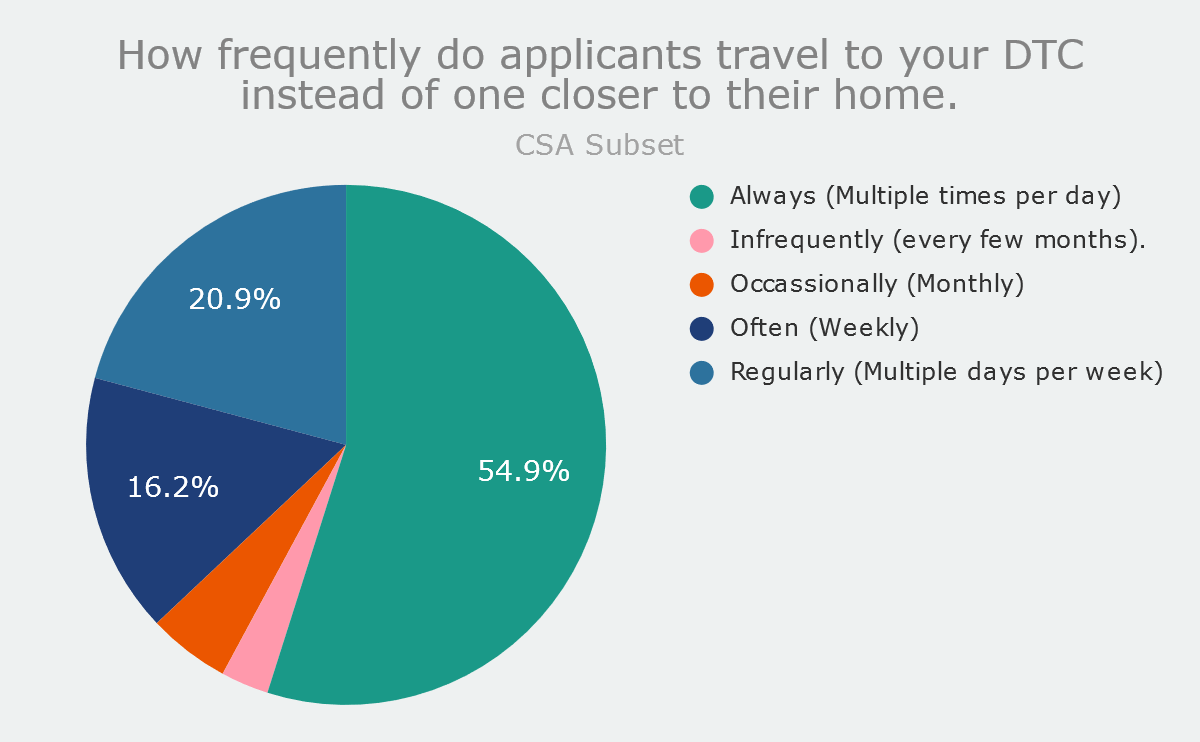 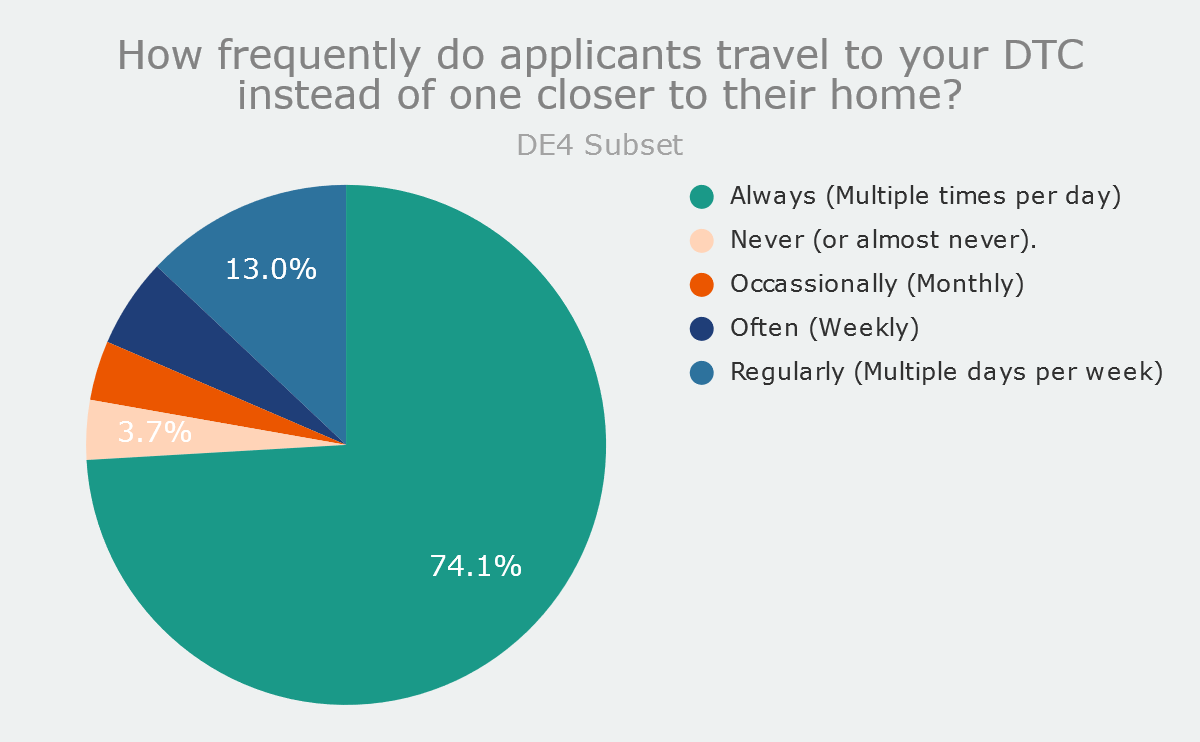 It is clear from the data there is a lot of movement around the province for DriveTest services.  It is important to note, that despite the huge number of members reporting “Always” in all three classifications, the metric was “multiple tests per day.”  This does not speak to the actual volumes, as some members may be doing three tests every day with applicants who had chosen to go to another centre, while still doing 15 tests from local applicants.  This also provides no insight into the reasons why someone may go to a distant centre, only that is a common occurrence at the majority of DTCs.

This survey suggests the MTO and Serco should actually review the origins of applicants and their reasons for attending other DTCs.  While there are sketchy reasons (e.g. DIs charging students more for distant “sooner” or “easier” exams), there is likely service deficiencies in some communities which makes traveling to other offices more appealing.

There will be further reports regarding the different roles and reports once we can consolidate the numerous comments that were included.  Stay tuned!